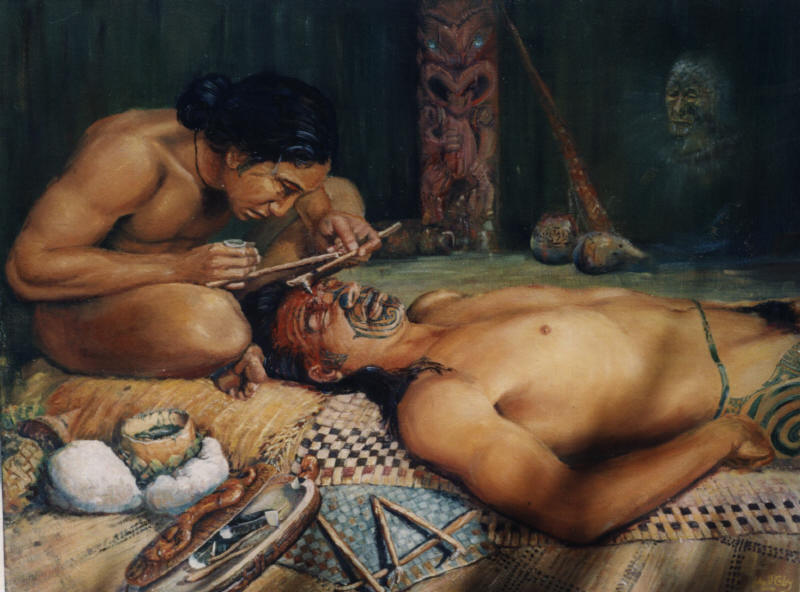 Tattoos have taken me on a wild and magical journey of self discovery. As early on as I can remember I’ve had a fascination with body art, and I began drawing on skin with my markers while only a child. Tattoos were not in my family or part of my surroundings, yet it now seems inevitable that I became a tattoo artist. I’m not really sure what it is that draws us to tattoos – especially at such an early age. Perhaps it is something engrained or “tattooed” deep in the human psyche from the tens of thousands of years that we’ve practiced this ritual. I believe tattoos are one of the most powerful ways we can take control and transform our lives through the transformation of our bodies. It is a practice of magic older than human history. Tattoos can heal us, protect us, empower us, and transform us. At its roots, tattooing is about a lot more than body adornment.

I don’t think I was so aware of the “magical” potential when I first started getting tattooed, yet the deeper I became involved, the more I began to discover through my own growth and experience. I began my career as a professional tattooist back in 1995 after attending San Francisco State University. I was soul-searching and wanted a profession where I could still be “myself” and put my creative skills to use. The tattoo scene was pretty different back then, and while it was just starting to blossom as a lucrative, “viable art-form”, there weren’t so many practitioners and the information and equipment was quite guarded. I had gone out in search of an apprenticeship only to be turned down and chased out by many an “ol’-timer”. Determined, I did a lot of my own research and continued to seek out tattooists who would be willing to share any bit of knowledge at all. Finally I found a crew of fresh, young, and enthusiastic tattooers at a small Berkeley shop who opened up to me and got me pointed in the right direction. While they helped me acquire quality equipment and dropped invaluable information, I never received an “official” apprenticeship, and thus began tattooing at home. This inevitably led me down the path that I am on now and instilled in me the one on one personal tattoo experience that is the foundation of my tattooing today.

Within a year or two I landed a job in a professional studio and started tattooing full-time. I also returned to school at the Academy of Art College in San Francisco and majored in illustration to keep up with the rapidly evolving scene. Practitioners with formal training and fine-arts degrees were now infiltrating the industry. Tattooing’s popularity was on the rise thanks to celebrity tattoos and the wave of the late 90’s subculture. The 200 year spell that had stigmatized tattooing in the West had finally been lifted. I paid my dues over the next few years working hard at a typical street shop. I sponged every bit of information that I possibly could from my co-workers and began to master the tools of the trade. I immersed myself in the tattoo world, attending conventions, submitting my works to internationally distributed magazines, and even giving lectures at college level art classes on tattooing and its tribal/spiritual roots. I had out-grown my little cage, and it was time for me to set out and explore the world through the eyes of a traveling tattooist. In the Spring of ’99 I set out across the United States with nothing more than $20, a tank of gas, and my tattoo gear. I spent over 3 months tattooing my way from place to place. I’d roll up and find the best shop in town, show them my portfolio, and try to land a job for a couple of weeks. I made it as far as Key West and back, meeting some phenomenal artists and people along the way, and had an amazing experience that would not only change me forever as a tattoo artist – but as a person.

When I returned from my cross country travels, a lot had changed inside of me. I had my own “spiritual awakening”, if you will, and realized life was far more complex and magical than I had ever imagined. I had a newfound sense of purpose in the world, and felt I wanted to help people, heal people, change people for the better. What better medium than tattooing?! So I started really getting into why people wanted to get tattooed. I realized that what I was doing was affecting people’s lives in much the same way tattoos had effected mine. We all get tattooed for many different reasons, but undeniably we’re all getting tattooed for some reason or other. The time and place, the story, the hopes and intentions are all such an important part of the experience. Throughout history in most indigenous cultures, the quality of artistry was always secondary to all of these other factors. Our ancestors realized that it was the magical tattoo ceremony (carried out by a shaman or witchdoctor ) that was significant and meant to mark or catalyze a change within the recipient. These images definitely affect us.

It is no different today, whether people realize it or not. I’m not sure when or why we forgot this idea, but Western society had driven tattooing underground and labeled it “deviant” and “disfiguring”. What could be more empowering in this chaotic world of uncertainty than the ability to enhance, beautify, and transform ourselves? Now, in modern times, tattooing has gone “mainstream”. While it might be more socially acceptable in the West, as with all trends, it has also been raped of its sacredness, and has been left hollow and meaningless. Many people are jumping on the bandwagon, but have forgotten tattooing’s magical power in lieu of its sex-appeal and flashy adornment.

It is my mission to merge the historical traditions of tattooing as a shamanic practice with my abilities as a contemporary trained fine-artist. My clients get the best of both worlds. I focus on each individual’s personal experience – whatever that might be. It varies greatly, but in a busy street shop you’re pretty limited to how much personal attention you can give, especially seeing as how it is affected by so many outside factors – ie. phones ringing, stereo blaring, the other artists working around you, and the never-ending “oooh! That’s gotta’ hurt!” from folks popping their heads in for a peek at the freak show. I realized I needed a more private and inspiring environment in an all custom-work studio. So, I started working at Erno Tattoo in the Lower Haight district of San Francisco. A reputable and historic studio, Erno’s had been voted one of SF’s top 10 “power shops” at the time I started working there. It was certainly a nice change from people picking out “decals” off the wall.

My life’s path eventually led me down to Santa Cruz, California in January of 2001. I worked there for nearly 3 years at a good friend’s award winning shop, “LoveDog Tattoo & Art Studio”. It was the right place to be at the right time, but I felt the most important aspect of my tattooing – the shamanic aspect – was being too greatly compromised. I sold everything I owned and left for New Zealand, where tattooing is still a thriving part of the indigenous culture. Another adventure of prolific self-discovery, this 6 month pilgrimage affirmed my destiny as a tattoo shaman, and I returned to the United States with even more determination.

For me it doesn’t matter how big or small a tattoo – how intricate or simple. Many clients come to me with a design ready to go, many have no design at all – only an “idea” and a desire. That’s why I have free one on one consultations with my people, to get to know them better and help build a “masterpiece”. The more I know about them and their personal situation, the more energy I can direct into their tattoo. No matter who, what, and why – the tattoo process is an intimate one, and I am proud to say that all of my clients become family.

I realize that not everyone is “spiritual” and that we all have different ideas and beliefs. I try to make sure people get whatever it is that they want and need out of their tattoo experience – no matter what that is. Some folks just want a beautiful piece done in a relaxed, private environment, others require ceremony and ritual for their personalized religious experience. I welcome all. I judge no one or their tattoos – I am merely here to help transform them.